Marathon runners call for the release of the UAE94

Marathon runners call for the release of the UAE94

On Sunday, 16th October, runners joined the Manchester Half Marathon to demand the release of Mohammad Al Roken and other prisoners of conscience. The action, organised by the ICFUAE and the Amnesty Manchester group, aimed to raise awareness of the unfair imprisonment and ill-treatment of the 94 activists, famously known as the "UAE94", detained in the UAE for peacefully exercising their rights to freedom of expression and association. 20,000 people and 12,000 runners are estimated to have attended the half-marathon in Manchester this morning.

The group of human rights activists, academics and lawyers were arbitrarily detained for signing a petition in 2011 calling for political reform in the government. They were arrested without charge and initially held in secret locations, without access to a lawyer or contact with their families, in contravention with international law. Some were forced to confess under ill-treatment but their allegations of torture were never investigated. 64 of those convicted received a sentence of more than 10 years imprisonment. The International Commission of Jurists (ICJ) condemned the trial as violating the international standards of fairness.

Henrike Greuel, the Middle East Coordinator of the Amnesty Manchester group, explains her reasons for running the marathon. "It is such an honor to run on behalf of these brave UAE activists who were arrested for their human rights activism", she told the ICFUAE. "I hope many people have seen this t-shirt at the Emirates Old Trafford and become aware of how hypocritical Manchester acts, by fighting for human rights and at the same time trading with a country that doesn't respect human rights activism."

Amnesty Manchester was engaged earlier this year in a campaign to highlight residents' concerns over the relations of Manchester City Council with a country that violates basic human rights.

The ICFUAE was founded to raise awareness of the hidden reality that the UAE conceals. Behind the scenes of wealth and welfare, the UAE have carried out a fierce clampdown on government critics and human rights activists in disregard to freedom of speech and universally accepted human rights norms.

The ICFUAE calls on the UAE government to immediately release Mohammad Al-Roken and other prisoners of conscience, to investigate all allegations of torture and to indict an independent judiciary to review their cases. 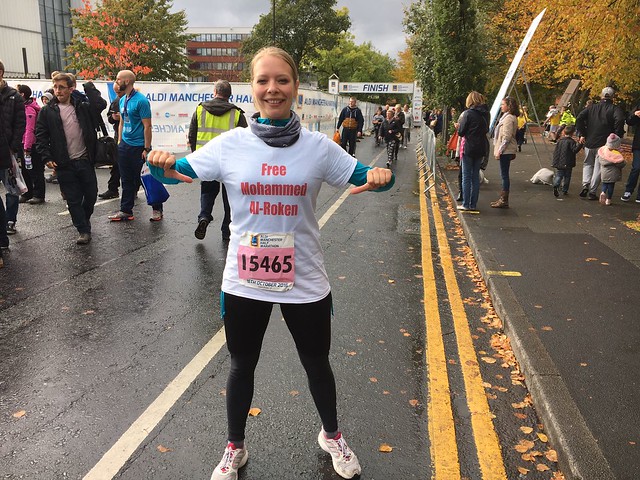